Put the Label on the Record

Going the extra mile for art - something that doesn't happen often these days - when every drop of ink counts, and when a few cut & pastes, mouse-clicks and control-S's will "get 'er done".

Unlike the extravagant, elaborate recording sessions of say the 1990's, the singers and orchestras of the acoustic recording era were all basically playing into a horn. Not to say there weren't high-saleried engineers hanging around trying to get things as purty as possible; but other than the recording environment itself there was little to tweak. Printing, on the other hand, was by now centuries old and a fine art in itself. Check out some of the marvelous eye-candy on the platters below.


This is one of my favorite releases and my initiation into the very appealing style of Billy Murray. The offensive genre claim "darky song" is misleading: the track, albeit jazzy,  is performed by whites, written by whites about a silly, awkward dance performed by silly, affluent whites all over the country.

I've posted this recording before - but here is a new master I made toying around with Audacity. There's more hiss, but the instruments are much clearer and defined, as are the vocalists. Great tune!

The 'big boys' - Victor and Columbia (and to a lesser degree Edison) already had the bulk of the market, and had no need to distinguish themselves with too much fancy stuff, although they did have some paper sleeves with pictures and hype for their stars.

Several of the middle tier guys, and quite a few of the lower ones, however, found ways to stand out in the crowd... many of them via exceptional designing on their cheerfully colored labels. A few of them are outright works of art, the music occasionally paling in comparison. I marvel at the work it most have taken to set up the printing on them.

I picked up most of these Italian recordings at a 'house sale' across the street from the school where I taught. (Dangerous place to have stacks of shellac for an impulsive man on a budget!) Gilda Mignonette (1890-1953), was born in Naples and was known in the states as the "Queen of the Emigrants"; having a popular career singing dramatic Neapolitan songs such as the one below.

Ah - the crowning jewel in my 78 collection - I've posted before but here is a much better scan in all of it's creamy whatever-color-that-is glory!! More Hawaiian music sung by whitey but who cares? It's actually a very catchy number, and once again it's Frank Ferara giving it whatever authenticity it has.


Have a look at the astounding detail that went into the label design - serious craftmenship! The choice of colors is sweet including the dark maroon against the colored vinyl. Classy! Note the Brooklyn shout out. 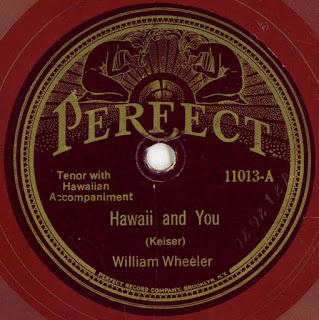 I've posted the "Glow Worm" track previously, as well; but again, here is a recent (yesterday) attempt at cleaning up the audio - marred in part by an ill-advised surface washing I tried after reading on the interwebs. Frank Ferera is the slide guitarist, accompanied by the most Hawaiian-sounding piano I've ever heard! (yuk-yuk) I love this recording for whatever bizarre reason... 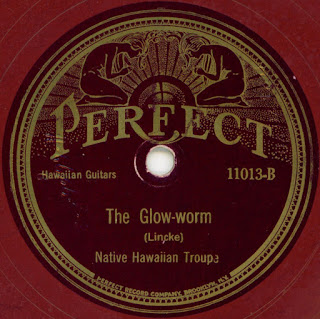 Inspired to step up the graphic design game on upcoming releases! More peeks into my unfocused amassing of old music to come. - SO
at April 06, 2012