The Shape of Music to Come is Full Circle

The composer Delius is said to have had an epiphany one evening in Florida, not far at all from where I'm living now, while managing his father's orange grove. One particularly sultry evening, sitting out on the verandah, the air carried to him the sound of plantation slaves, singing in the distance. The pure, rich harmonies transfixed and transported him; moving him deeply. More than one biographer has emphasized that for the rest of his life, Delius was trying to re-capture or recreate that moment into his own music. I don't know whether he accomplished this or not, but he sure made some astonishingly beautiful music trying.
My point is that musicians experience moments, long or short, many or few, that wind up defining who we are and will grow to be, musically. I am of the conviction that God is behind these moments, He chooses them specifically for us, knowing how they will impress, impact and inspire us for years to come. I've had too many dots connected from 'random' occurrences over extraordinarily stretched-out timelines for me to think anything else.
One of my favorite stories to relay is when at age 5 or 6, my mom was going to go out Christmas shopping for me. I was already a music fiend, so we all knew what she was getting. I told her that I didn't want any more kid-stuff records. She asked me what I wanted instead. I told her "get me some real rock and roll". An hour or two later she returned with this: 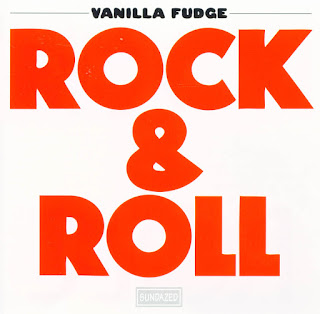 To this day I'll never know exactly whether this was my mom's offbeat sense of humor at work, or a sincere, naive effort. I do remember her telling me she had help from the store clerk in filling my request. She also brought me McCartney's first solo outing. I sheepishly confess I expressed my displeasure. (In stark contrast to nowadays - I was an insufferable perfectionist as a child). Between what looked like some posers' attempt at achieving rock coolness, and the baffling bowl of cherries cover, and the overall raw sound quality of Paul's home recordings, I felt a little gyped. But I was still a fiend, and wound up living with and eventually loving both albums (particularly the Apple release).
My new-found love for expert drumming, clever bass lines, melodic overdriven guitar, seriously heavy organ, creative harmonies and one of the widest vibratos known to man, collectively known as Vanilla Fudge (oddly I never heard their biggest hit until decades later), inspired my mom to hook me up again with another release. 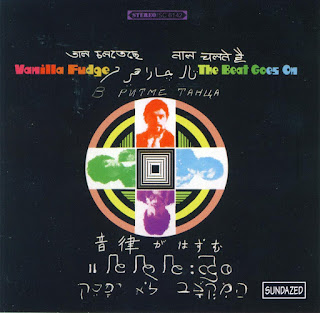 If you are like the majority of earthlings and know nothing about this album - it's a bit difficult to explain. Critics and some members of the band would describe it thusly - Producer Shadow Morton (of Shangri-Las fame) decides to exploit Vanilla Fudge's new found massive success and fame by using them as a vehicle for his own peculiar and non-commercial, strange 1960s vision; torpedoing their careers in the process.
Released early 1968, The layout of the contents made it very radio unfriendly - long sound collages, brief snatches of oddly-recorded familiar songs in giant medleys, a four note theme by Sonny Bono of all people, connecting the various elements of the disc, often pounded out in an orchestral manner by a very distorted band. There is not a "single" to be found. Only their second album - one track features interviews with each band member! Somehow it manages to not cross over into indulgence but remains tasteful. In spite of the band's dread at the finished product - the album managed to peak at #17 on the charts. Which oughtta tell you something...
In some rare nostalgic moment, I placed both the above albums on my wishlist at Amazon. This Christmas, I told my brother to use the list to buy me 1 album. He bowled me over by giving me nearly the whole list - some 12 cds! I listened to Rock and Roll and found it was more remote in my mind than I thought it would be - perhaps a second listen will bring it all back.
But back in the day I wore my copy of "The Beat Goes On" out. There were just things and sounds and ideas on that album that for a few years, completely agreed with me, like some complimentary friend. I never realized how much it shaped my tastes, concepts and preferences until hearing it again over the holidays. In particular, I seem to have carried elements and sounds from the track below with me like an atlas or reference book.

It's by far the most abstract, non-musical track. Yet the use of delay on certain phrases turns the spoken words into a type of music, not unlike what Steve Reich did 20 years later with "Different Trains". The album begins with a "Sketch" on organ and piano - a rock fanfare/prelude, ending with the first recorded sound: Edison reciting "Mary Had a Little Lamb". In another long track, the band chronicles music itself from Mozart to the Beatles.
Shadow Morton definitely had a vision - a psychedelic one, no doubt, and a bit time sensitive. The project has a unity of style, concept and purpose. The timeless, universal, healing & peaceful language of music seems to be the point (see the cover), along with anti-war sentiments and the somewhat profound if not eloquent meaning of Bono's lyric (the title track gets 6 different treatments on the album). The bands participation and contribution is also very fitting - at one point cleverly turning the mundane bluesy melody of Bono's verse into a substantial and memorable theme. Their trust and unity with Morton is felt throughout. For me the album not only works, but is dramatic and engaging, some 40 years out of it's hippie home. - SO
at January 09, 2012