I recently posted this first lp's art on FB - but here it is in all it's glory - can't wait to listen to Antar since it was composed just before Sheherazade, an all time favorite. The lusciously colored artwork is by Abe Gurvin. 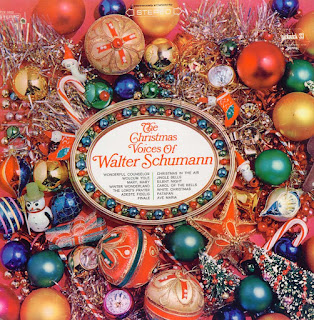 On to the Christmas music. Got this at a now-closed junk store in town. For a Pickwick release - this is some pretty sweet artwork. Walter Schumann - best known for the "Daaaa -duh - daht- daht" theme of "Dragnet", has some nice arrangements - although the opening and closing "Christmas in the Air" is a bit too holly jolly for me. The album consists of 2 side-long tracks, making it slightly cooler. 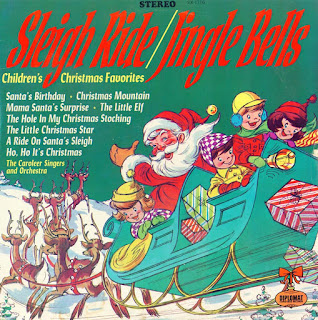 I don't know much about this one - I haven't dared listen to it yet (I've had it for years) - I do know it's a favorite youth memory among fellow drugstore record peeps. Any album that uses the same artwork for the front and back raises doubts for me. 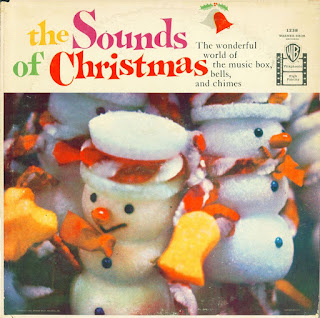 Ah - a recent find and for 25 cents! A new gem in my collection. Some of the most completely innocent and harmless sounding Christmas music you'll find. As a kid, a favorite feeling of mine was giving my bedroom to my visiting grandmother, and sleeping on the couch right next to the Christmas tree. This would have been the perfect album for that. The liner notes describe it best: "When this holiday of devotion and delight leaves the crowded streets, the gay parties... when it quietly shuts the door on the outside world and becomes an intimate, family kind of thing, then a different sound takes over."  Love the cover design. Also classy - Warner Bros. recommending albums from other record labels on the back. 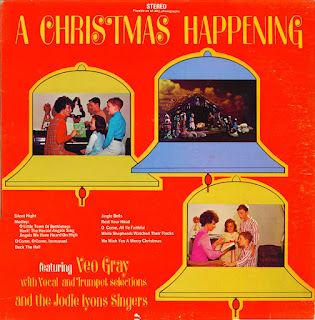 Groovy! No worries - Veo Gray's wife and kids do not supply any of the singing or music-making. They are there, perhaps, to portray family values. A truthful cover would have mom in fringe and go-go boots. Some fine arranging from Jodie Lyons - in what could have been some seriously dated and laughable shlock. The musicians are funky and at times, downright woodstock-y. The "Jodie Lyons singers" are often supplied with doo-doos and bup-bahs, right out of late '60s trying-to-be-relevant movie soundtracks, but it works! Veo Gray is the amusing oddity in all of this; sounding like he was transported from the Lawrence Welk show and dropped into an Association recording session; completely oblivious of his surroundings. He's a capable singer and trumpet player, though, and gives the album that 'classic' Christmas lp feel. He relaxes a little in "Rest Your Head" and fits right in. Major find - another value at a quarter! 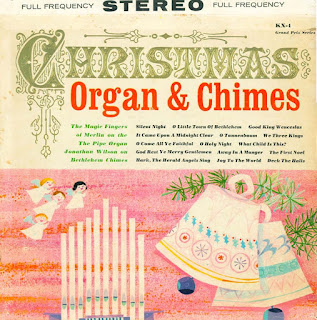 Alas for me - the Christmas Organ & Chimes vinyl turned out to be completely cracked, and is now in a landfill. I kept the cover though - I like the gold ink and crazy font for 'Christmas' and of course, the dated artwork. "The Magic Fingers of Merlin" haha 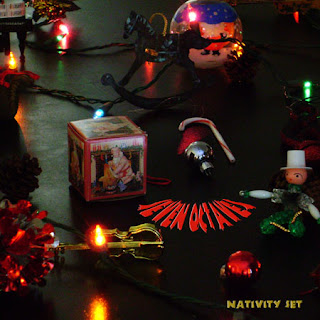 Yep - unabashed self plugging. Well... maybe a little abashed. Chain D.L.K. says "The four traditional tracks have been filtered through Kenny's techno ambient touch and sound great. A bit of mystery have been added to the joyful themes and now it seems to listen to Kraftwerk play X-mas tunes going door to door looking for robot hearts to warm." The 5th track is an original called "Incarnate".You can get this electronic Christmas music at Itunes or at Amazon.
at November 07, 2011