What's In My Zen Stone - July 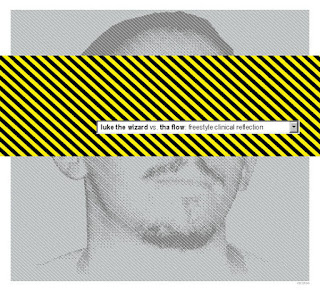 Still in jazzer mode - I'm finding it harder to focus on both at the same time. But what little electronic is in the player is pretty hot. And most of it free. (big fan of sentence fragments, lately). Take for instance:
Aaron Goldbody vs. Luke the Wizard - "Z Veseljem Exported CD"  circa 2001 From a Netlabel called Khavi Collective who specialize in ambient and chill, but Aaron aka Luke aka Luka Princic from Slovenia (or Afghanistan, depending on which social network you ask) is more of a breakbeats kinda guy. Khavi lists this ep as minimal techno - I guess that's correct. Anyway it's lots of swirly arpeggios & neat sounds, funky pulsing bass and clever, danceable drum programming; with just enough ideas and development to keep you engaged. The 2 songs are barely distinguishable from each other, but make a good short mix. This puppy's been circulating around the internet forever, I picked it up kind of late in 2005 along with
Luke The Wizard Vs. Tha Flow - Freestyle Clinical Reflection- circa 2001 also from Khavi. Pleasant vibe set up by a slowly-pulsing spacey synth winds up being metric modulation against some sweet little bleep, which in turn explodes into hot and very funky breaks with a very serious and memorable bass line. Haunting high choir chords close it out. This track is killer and over too soon. Again - these have been free on the net forever, so you might already know this.

As for Luke the Wizard aka DJ Nova he's also very easy to find online. It seems real important to him to stress the fact he's a 'deviator' so I didn't dig real deep. None of the visuals were offensive. If you really dig "Freestyle Clinical Reflection" there is a lengthy downloadable remix over on his Soundcloud page.

The Higher Intelligence Agency - Spectral - chill, ambient techno circa 1992 Famous project of ambient dub pioneer Bobby Bird from Birmingham, UK. Just what the label says, just add the words good & entertaining in front of it. Also a 2005 acquisition when it was free. Alas - now it ain't (here's the album on amazon) but you can listen and watch the trippy colors made by the misinformed Russian who posted it on youtube below. Enjoy - SO